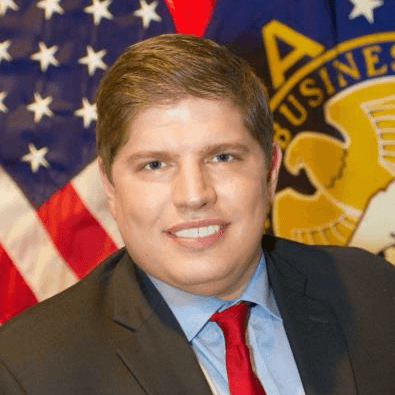 Robert Scott serves as the regional administrator for the Great Lakes Region of the U.S. Small Business Administration, overseeing the delivery of the agency’s financial assistance, technical assistance and government contracting activities throughout Illinois, Indiana, Michigan, Minnesota, Ohio and Wisconsin.
Prior to the SBA, Scott ran his own consulting firm, practiced law at Oldham & Deitering in Clayton, Ohio, and served as the vice mayor in Kettering, Ohio, where he remains in service as a city councilman. He has worked in the Ohio House of Representatives as a legislative aide and on several major political campaigns in Ohio, including serving as the state director for Donald J. Trump for President. Additionally, Scott wrote for the Dayton Daily News, Dayton City Paper and was a syndicated columnist for Brown Newspapers, Inc.
Scott received a B.S. from Wright State University and an honors juris doctorate degree from the University of Dayton School of Law. He is a member of the Dayton Masonic Lodge, Ohio State Bar Association and Kettering Rotary Club. Scott received a “Forty under 40” award from the American Association of Political Consultants in 2016 and the Dayton Business Journal named him one of the city’s notable “Forty under 40” professionals in 2015.
Sessions