The Obama Presidential Center architects, taking another stab at making the signature museum tower less Stonehenge and more svelte, have trimmed some corners and added more glass near the bottom on the south wall.

Still, much of that wall is still an unyielding expanse of stone. The challenge, taking some time to solve, is how to design an inspiring structure destined to be a Chicago landmark. The quandary is how to serve a windows-averse museum needing exhibit space and the folks who have to look at the thing from the outside in perpetuity.

The revamped design of the tower and other parts of the proposed campus are being unveiled just before the third Obama Foundation Summit, to start Tuesday with former President Barack Obama and former first lady Michelle coming home to attend.

On Tuesday morning, Mrs. Obama and her brother, Craig Robinson, will be interviewed by journalist and author Isabel Wilkerson about growing up on the South Side, subjects both of them have written about in their respective books.

In the afternoon, Obama will be interviewed by actress Yara Shahidi about bringing “positive change” to communities around the globe.

The Obama Foundation continues to build out a global menu of programs while the Obama Presidential Center in Jackson Park is still in need of government approvals and a final design for the complex, estimated to cost at least $500 million.

That the designs are still a work-in-progress is not impeding the construction in the 19.3-acre campus, fronting on Stony Island Avenue, because the federal reviews of the project are ongoing — soon to hit the two-year mark - and groundbreaking won’t take place until they are done.

The first meeting of the various stakeholders for the federal review was on Dec. 1, 2017.

This is the third tower design and is likely not the last. The first design was in May 2017. Architects Tod Williams and Billie Tsien created what I described as “an almost windowless, squat monolith with a grim stone façade that was about 180 feet tall.”

The second design, in January 2018, slimmed down the building some but made it taller, to 235 feet above the ground.

In a quest to make the museum tower what the foundation called more “organic” and “elegant” and “sculptural,” the profile of the structure will be further trimmed by cutting off some of the southwest and southeast corner.

The building will be opened up from the streetscape perspective by adding an 88-foot section of clear windows on the mezzanine level. 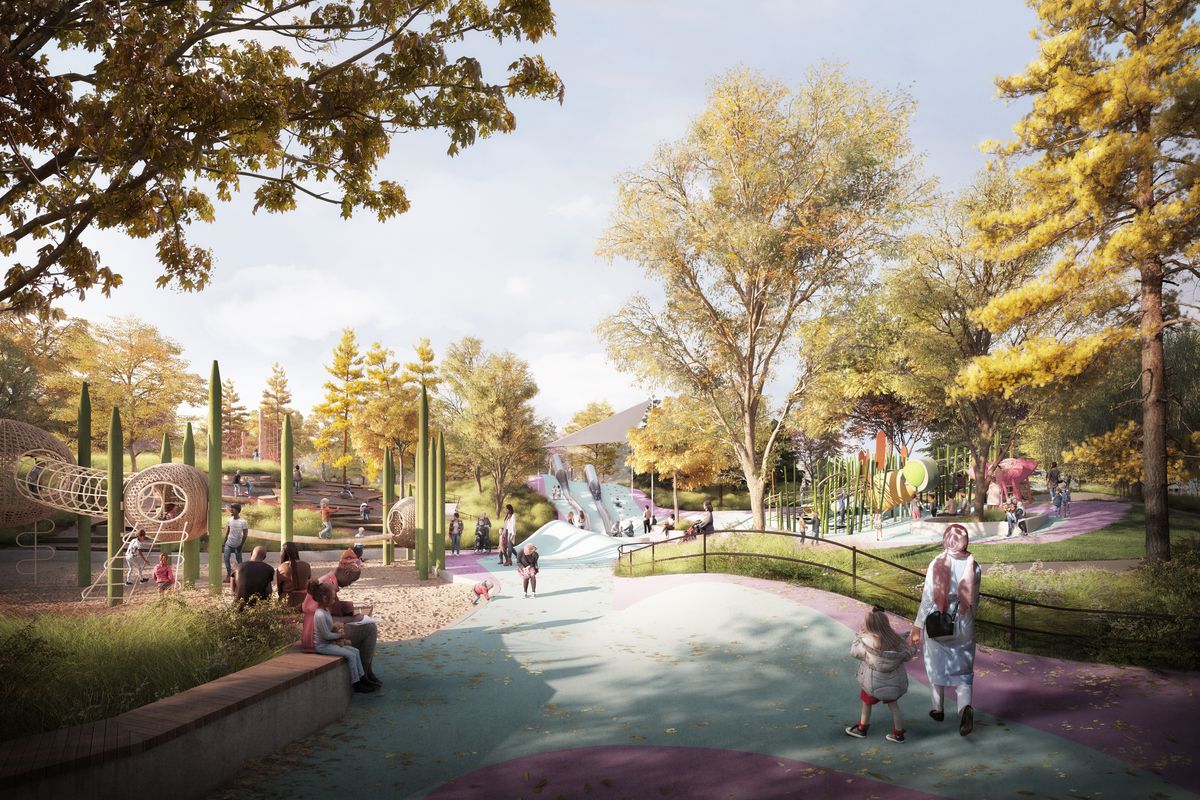 One building on the campus will be a Chicago Public Library branch, included only after Obama decided that his presidential center will not house the Obama Presidential Library. The drawing of the proposed interior of the library showed it to be remarkably routine.

The revised plans provide details for the two-acre playground: One with fanciful play equipment to look like “larger than life” animals built around a lagoon theme with “child-size nests” and the other a “climbing forest” above the underground garage.

There is no targeted completion date for the review, to determine if there are adverse effects that then need time to be mitigated. The Obama Foundation no longer provides estimated groundbreaking dates.

The federal reviews are needed because Obama decided — and the city and Park District agreed — to build his Presidential Center in Jackson Park, listed on the federal National Register of Historic Places in 1972. A federal court case, fighting locating the project in Jackson Park, lost in the U.S. District Court and is on appeal.