At a Tuesday night community meeting hosted by 4th Ward Alderman Sophia King, the public got its best look yet at a plan to transform the former Michael Reese Hospital site into a sprawling megadevelopment featuring a mix of affordable and market-rate housing, a life sciences campus, a data center, dedicated community spaces, and a new 31st Street Metra station. If all goes to plan, work could begin in as little as 18 months.

Located on Chicago’s Near South Side in Bronzeville, the nearly 100-acre parcel sits just west of Lake Shore Drive, between McCormick Place to the north and 31st Street to the south. Previously pitched as the site of the Olympic Village during Chicago’s failed bid for the 2016 summer games and, more recently, a candidate for Amazon’s HQ2, the city-owned site has remained vacant since its namesake hospital closed more than a decade ago.

In 2017 the city selected a joint venture of Farpoint Development, Draper & Kramer, Chicago Neighborhood Initiatives, McLaurin Development Partners, and Bronzeville Community Development Partnership to redevelop the Reese site. Since then, the team—known collectively as GRIT—has worked with the community, Alderman King, and the alderman’s community advisory committee to refine the plan.

“A lot has been said over the past several months about what could happen or not happen at Michael Reese,” said King at Tuesday’s meeting. “Tonight we’re here to share the vision of what is going to happen at the former Michael Reese development.” 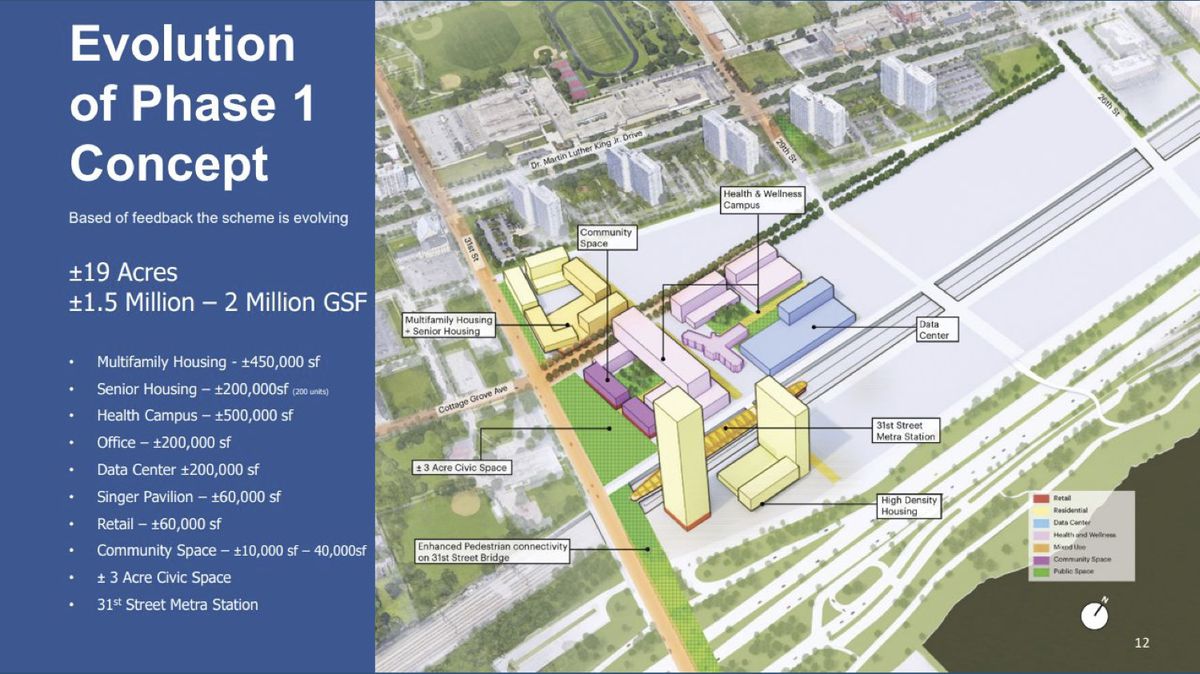 Phase one would occupy an 19-acre parcel at the southern edge of the sprawling site. 4th Ward

Before getting into specific details, King took the opportunity to double down on her earlier position that a casino was not in the cards for the location—despite being included in Mayor Lightfoot’s initial feasibility study. The alderman, as well as the community, were vocal in their opposition to a casino at the former hospital site, King said.

The latest version of the plan ditches the Burnham Lakefront name in favor of Bronzeville Lakefront, but includes many aspects of the previous conceptual plan presented early this year. Clustering around 31st Street and Cottage Grove Avenue, phase one involves a 19-acre area with 1.5 million to 2 million square feet of housing, retail, and community space. A component of that will include a health sciences campus with a data center which will tie into existing fiber optic cables beneath the site. Developers will also rehab the Singer Pavilion, the sole surviving structure from the old hospital.

The biggest changes involve moving the public parks and plazas to face 31st Street, the senior and multi-family housing further west, and adding new residential towers on the east (where a truck lot currently exists). The towers were put into the plan based on feedback from the community, according to King. 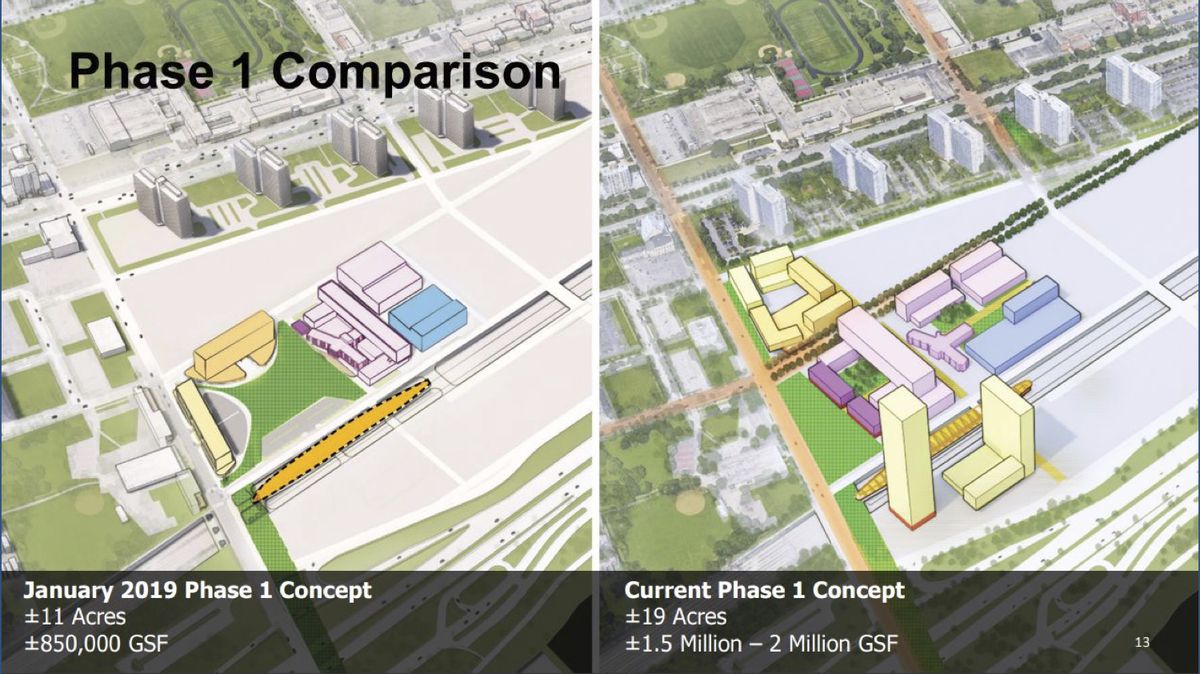 A side-by-side comparison of the earlier phase one proposal presented in the spring and the current plan. 4th Ward

The alderman stressed, however, that nothing was “set in stone” and the plans are likely to evolve as discussions continue. Details such as residential unit count, building height, and design still need to be fleshed out. The development team says it is open to holding an architectural design competition for the more prominent lakefront structures.

“This is an opportunity to change the skyline, to change a 100-acre piece of land,” said Regina Stilp of Farpoint Development. “We understand the responsibility we have.”

The Bronzeville Lakefront plan will need to clear three city approvals. The massive development requires zoning approval as well as a deal for an unspecified amount of tax increment financing (TIF) funds to help pay for things like new streets and the proposed Metra stop. The city and developers must also finalize the land sale and redevelopment agreement for the city-owned Reese parcel as well as acquire the privately-held northern portion of the site.

Cindy Roubik of the Chicago Department of Planning and Development said she expects to see a preliminary master plan in early 2020, an updated plan in mid-2020, and the development to go before the Chicago Plan Commission and City Council that fall. If all goes as planned, site work at the former Michael Reese parcel could begin in 18 months, followed by the first signs of vertical construction 12 months after that. 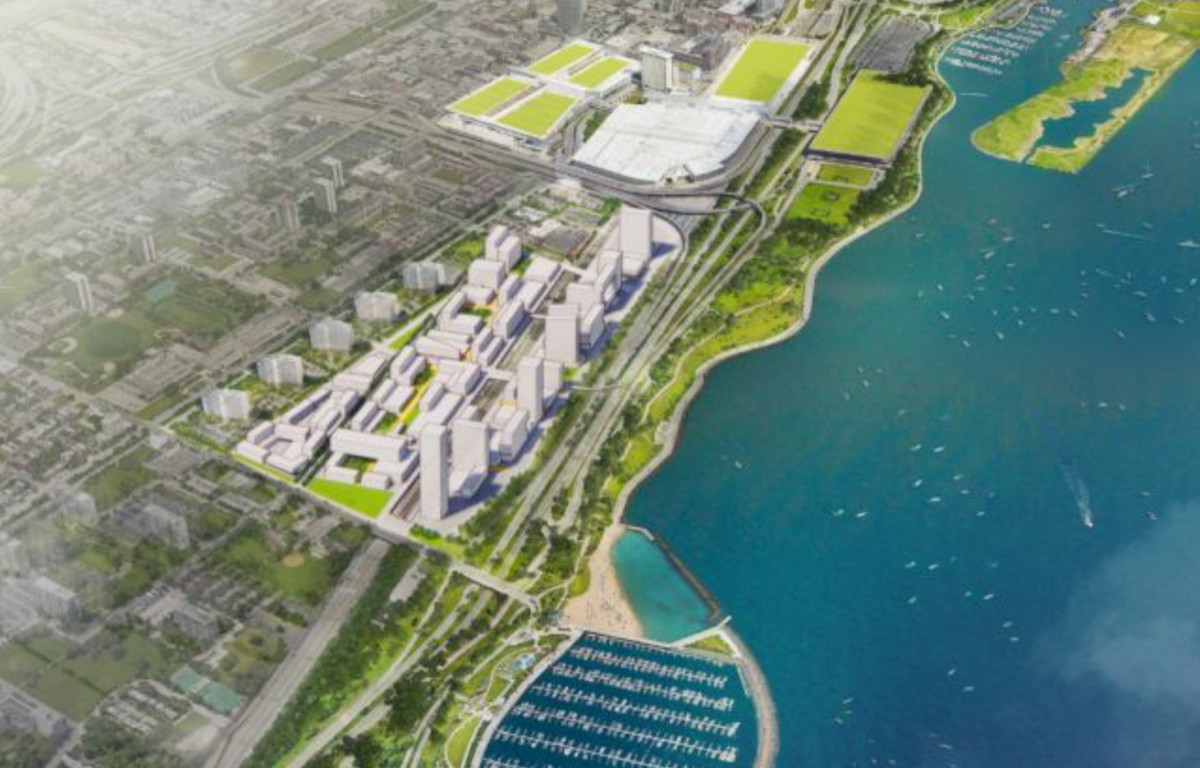 A conceptual massing diagram showing what the full build-out from 31st Street to McCormick Place could look like. 4th Ward

Looking ahead, future phases of Bronzeville Lakefront could grow the massive project to between 10 and 14 million square feet. A full build-out could take up to 12 years to complete, Farpoint’s Scott Goodman said. His firm and its partners are also under contract to purchase the neighboring Prairie Shores apartment complex, where they plan to add new residential amenities and update many of its 1,675 apartments.

Neighbors attending Tuesday’s meeting were overwhelmingly supportive of the Bronzeville Lakefront plan and seemed well-versed in its finer details. “We owe a lot to the community advisory committee,” Stilp told Curbed Chicago. “It wasn’t the easiest process to navigate at first, but the feedback we received made the development better.”